Mackewin “Mack” Powell, Epsilon Beta, was recently chosen to serve Pi Kappa Phi on the Council of Archons and as the Student Representative to the National Council. We took some time to ask about his Pi Kappa Phi experience, his commitment to servant leadership, and what he wants to accomplish. 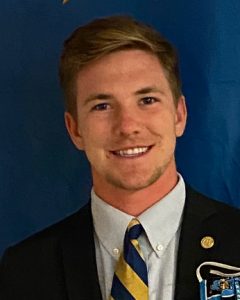 Why did you decide to join the Epsilon Beta Chapter of Pi Kappa Phi?

My Freshman year I was very interested in rushing a fraternity.  However, the incentive of becoming a Founding Father, having a lifelong relationship with the brothers I met, and having the opportunity to build on my leadership and volunteer experience, led me to join the Epsilon Beta Chapter of Pi Kappa Phi.

What has your involvement in Pi Kappa Phi looked like so far?

As a freshman, I wanted to be as involved as possible so I could explore the different leadership positions in the future. I was/am on many different committees — brotherhood, social, philanthropy, recruitment, standards, and joined our bible study group — as well as participated in Greek IM football, basketball, volleyball, and other external fraternal events. As a sophomore, I was nominated to be the social chair in the fall of 2019, then I was elected as the Archon for the 2020 year.

I believe that due to the size of our Chapter (~83 men after the Fall of 2020), I am able to share a more personal relationship with each brother. By having a stronger brotherhood connection with the men in my chapter, I can more easily hold them accountable, knowing they are representing our fraternity and it will benefit my brother in the end. Since joining GVSU’s institution, I have participated in many programs involving RISE, volunteer work for the community, and the Pre-Dental Club all while maintaining an above average GPA for my field of study.

Who has been the most influential person in your Pi Kappa Phi experience and why?

Although it is very hard to choose from so many experiences, I would have to say that Tyler Pulk has been the most influential person in my Pi Kappa Phi experience. I would not have joined this fraternity, had it not been for him reaching out to me to get to know me better, the countless nights I have spent at his place, and the fun, crazy adventures which include driving twelve and a half hours to initiate another chapter right after finals week.

What do you want to accomplish as a member of the Council of Archons and as the Student Representative to the National Council?

As a member of the Council of Archons and the Student Representative to the National Council, I would like to develop critical leadership and decision making skills for large scale operations. I would also like to create efficiency between the communication of the National Council and the brothers of each individual chapter, as well as help leaders in each chapter have access to more outlets for success.

What are you studying, and what do you want to accomplish after college as a Pi Kappa Phi alumnus?

I am currently a Junior at Grand Valley State University majoring in biochemistry and minoring in business with an emphasis on pre-dental. After graduating from GVSU, I plan on attending a dental school in the western United States, where I can further my studies to become an orthodontist.

If you could tell a new associate member one thing, what would you want them to know?

Enjoy college, but remember that you went to school to gain education towards your future career, whatever that may be. Pi Kappa Phi is an excellent organization at building relationships to keep brothers coming back to institutions, while also focusing on becoming a better man, and having fun. It is an opportunity that nobody should take for granted and everyone with the drive should explore.