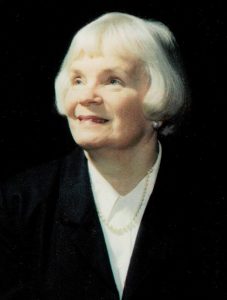 With a profound sense of loss and deep sadness, Pi Kappa Phi Fraternity mourns the passing of Hazel “Connie” Owen on September 23, 2020.
She was beloved and endeared herself to fraternity members and friends alike. She not only entertained staff and volunteers in their home, but treated them as family. She was a gracious and proper host. Even after her husband Durward Owen’s retirement in 1994, they both were a welcome and constant presence at fraternal events.
When Durward accepted the position as Pi Kappa Phi Executive Director in 1959 he told her “it will only be for two years.” Fortunately for all of us, they both served 35 years and beyond. With appropriate deference to Mrs. Fogarty, the mother of Founder Simon Fogarty, who was deemed the mother of the fraternity in its early years, we have been blessed with Connie for 60 plus years as our “mother” and the fraternity’s “First Lady”.
She passed just shy of her 90th birthday which would have been on October 4th. When Durward celebrated his 90th birthday on August 30th almost all of the hundreds of cards he received spoke of Connie.
As a fitting tribute in 2014, the fraternity instituted the Connie Owen Order of the Rose award to recognize the significant women in the life of the fraternity, and named her the first recipient. She truly exemplified the lyric in the Rose of Pi Kappa Phi — “No flower that grows is like the rose. She’s the flower of Pi Kappa Phi”.
Connie was so much more than her relationship with the fraternity. As her obituary indicates, she was a loving mother and a tireless church and community volunteer.
A service to celebrate her life will be held at a later date at Myers Park United Methodist Church. A family-only private committal service will be held at the church columbarium.
In lieu of flowers, the family requests donations be made in her honor to a charity of your choice. Online condolences can be shared here.