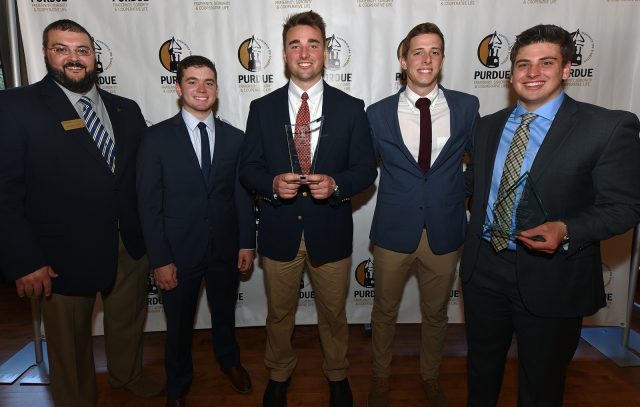 Continuing with a legacy that has spanned a dozen years, the Omega chapter (Purdue) was named the top campus fraternity 2019.

On April 8, the chapter won its second consecutive RB Stewart Award, signifying it as best at Purdue. It was also the 9th time in the last 12 years the chapter has been recognized as such. Furthermore, Nate Longo was named the Steven C. Beering Outstanding Interfraternity President of the Year, too.

“We have been blessed with excellent leaders in the past who have truly laid the path for us to continue to succeed,” Longo said in reaction to the news. “I think that we are honoring those members who came before us by both continuing on their legacies and evolving to continue to lead the fraternity community locally and nationally.”

There were five finalists for the top chapter award, according to Purdue associate dean of students Brandon Cutler.

“This chapter has a heart for philanthropy and strives to excel academically and in service,” he said as he made the announcement. “The chapter raised more than $95,000 for charitable causes in 2018. The service hour member average for this chapter is more than 48 hours a semester.”

Statistics bear that out.

In the Fall 2018 semester, Pi Kappa Phi was No. 1 in service hours, No. 1 in philanthropy dollars raised, No. 3 in chapter size and No. 4 in average GPA among Purdue’s 41 fraternities. And Pi Kappa Phi had significantly more service hours – nearly three times the closest competitor – and dollars raised for philanthropy – more than 2.5 times the closest one.

It also boasts the co-chairman of Old Masters, a campus-wide program to bring alumni back to campus to share their success stories, and IFC president. Chapter members also hold executive positions in the Purdue University Dance Marathon and Boiler Gold Rush.

“What set us apart to win the award yet again was two things,” Longo said, “1) the consistency of excellence, this was looked as yet another great year for Pi Kapp, and 2) our keen awareness for risk management and lack of conduct violations. This allowed us to be set apart from the rest of the finalists.”

Longo was a key component in that success, which led to him being named the top fraternity president.

“As president (in 2018), he had the keen ability to bring people together,” wrote chapter advisor Pat Kuhnle in his nomination letter. “He had the ability to comprehend all the chapter members’ perspectives – from the new associate to the most veteran … Longo took a different approach to leadership – building coalitions, trying to integrate varying opinions then coalescing them into a cohesive package.”

Longo, a junior from Dublin, Ohio, is an electrical engineering major. He a 4.0 cumulative GPA and is the 2019 IFC president. 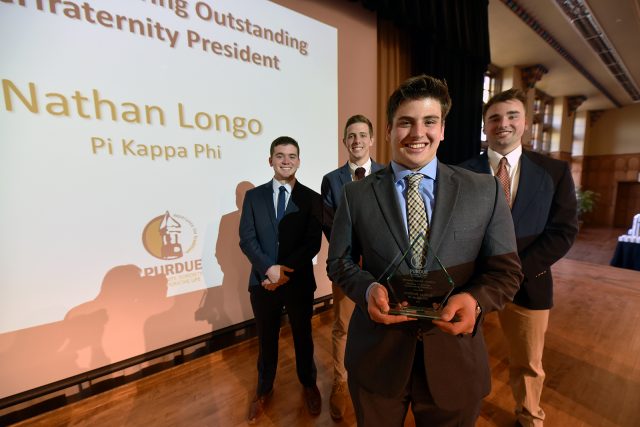 He was humbled by winning the award.

“I cannot fully express my gratefulness to my fellow chapter leaders and members who really did a lot of the legwork to allow our chapter to excel,” he said. “I focused during my term to better the chapter, continue to win awards such as the RB Stewart and to develop young men into leaders, including myself.

“I believe as though I grew a lot as a leader during my term as Archon and I am extremely blessed to be recognized for this hard work.”