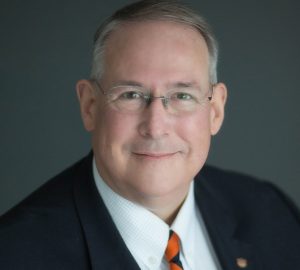 Alpha Iota (Auburn) Alumnus Ralph S. Foster Jr. recently retired from his longtime role as the Assistant Vice President for University Outreach and Public Service at Auburn University. Foster, with more than 31 years of service to Auburn University, was awarded Emeritus status by Auburn President Jay Gogue in recognition of his career contributions to the university.

“It has been an honor to serve Auburn University all these years, and I’m blessed to have worked with the dynamic leadership of University Outreach and dedicated coworkers in my office, as well as so many other great people across campus and beyond,” said Foster in a press release from Auburn University. “Outreach and engagement are truly the heart of our land-grant mission, and the part of the Auburn Spirit which urges us to make a difference in the lives of people all across our state.”

Foster joined the Alpha Iota Chapter in 1991 as its 1309th initiate. He served as the Alpha Iota chapter advisor from 1991-2002 and also as regional governor for the Alabama region. Foster continues to serve on the chapter’s alumni boar, andFoster twice received the Alpha Iota Alumnus of the Year Award (1992, 1997), was elected to the Nu Phi Society in 2002 and served on the Pi Kappa Phi Centennial Commission in 2004. He received his Silver Legion designation in 2016.

The full announcement from Auburn University can be read here. Congratulations to Ralph on his long career and we wish him a happy retirement!