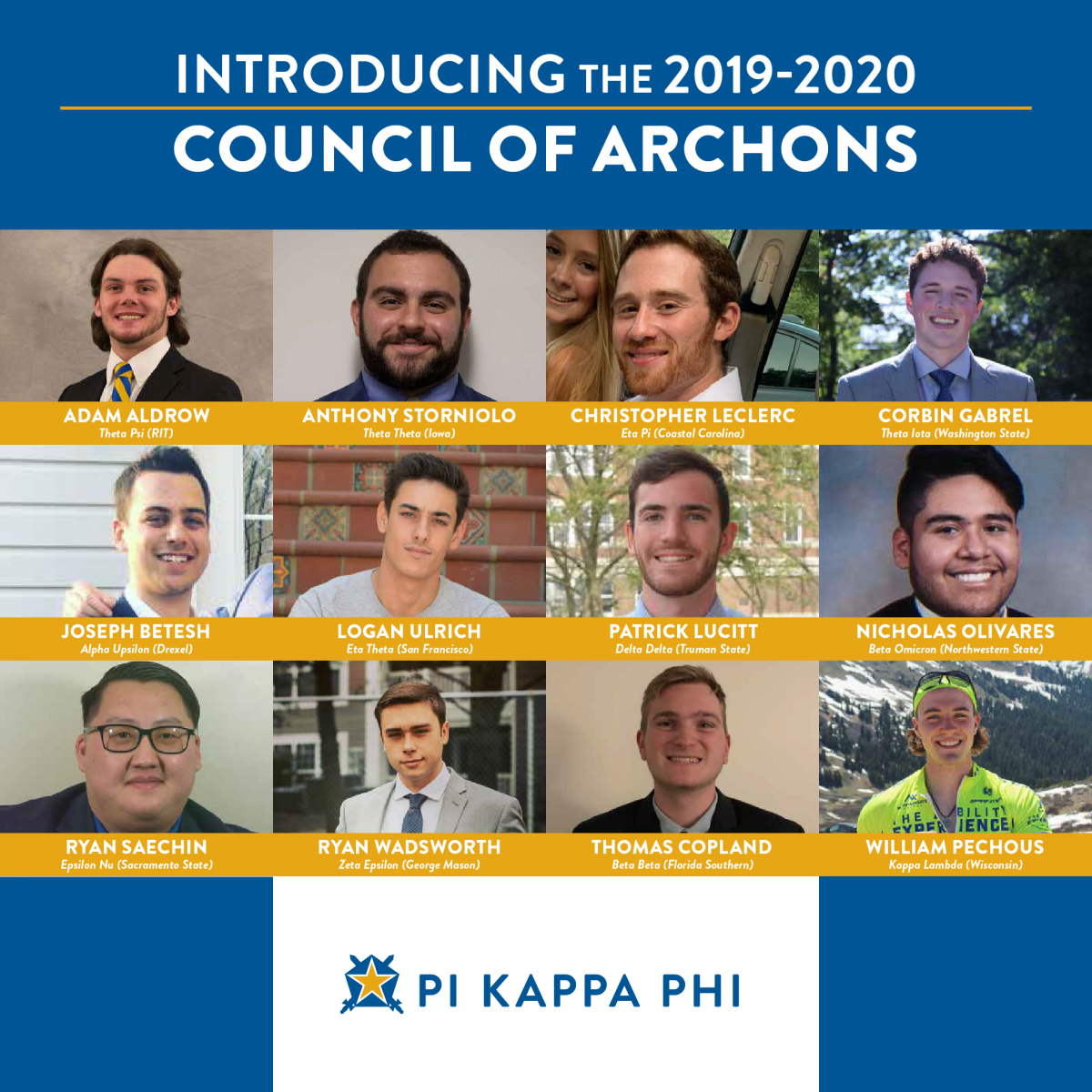 From the beginning, Pi Kappa Phi has been led by extraordinary men. Because of that leadership, we have prospered in good times and persevered during difficult ones. The Council of Archons is a student advisory board to the National Council and serves as a liaison between undergraduate chapters and the national fraternity. The group consists of 12 undergraduate members who are current or past archons.

Join us in congratulating the 12 men who have been selected to serve on the 2019-2020 Council of Archons:

Adam Aldrow, Theta Psi (RIT): Aldrow is the current Archon from the Theta Psi chapter at the Rochester Institute of Technology and is pursuing a dual degree BS/MS program in biomedical engineering and public policy. He is from Buffalo, New York, and a big Bills fan.

Anthony Storniolo, Theta Theta (Iowa): Storniolo was born in Arlington Heights, Illinois and is now a senior majoring in sports management on a pre-law track. He is the current Archon of the Theta Theta chapter and grew up playing sports, performing in theatre and participating in Boy Scouts where he was able to adapt leadership skills.

Christopher Leclerc, Eta Pi (Coastal Carolina): Leclerc is a senior accounting major from Madison, CT. He joined Pi Kappa Phi in the spring of 2017 his freshman year, which he said has been one of the most rewarding decisions he has made in his life. Aside from meeting his life long friends, he said his fraternity has helped mold him into a better man.

Corbin Gabrel, Theta Iota (Washington State): Gabrel was born and raised in Seattle, Washington and is now a junior advertising major at Washington State University. He is the current Archon of the Theta Iota chapter and grew up playing multiple sports, focusing on football and basketball where he began working on his leadership. He has always loved having a sense of family, and being the archon of the Theta Iota chapter gave him a chance to grow the brotherhood further.

Joseph Betesh, Alpha Upsilon (Drexel): Betesh is currently a senior accounting and finance major at Drexel University Alpha Upsilon chapter in Philadelphia, Pennsylvania. In the past, he has served as a member of the chapter’s standards board, new member educator, treasurer, and two terms as archon. He was the designated representative for the Alpha Upsilon chapter in 2018 for the 56th Supreme Chapter in Chicago and also received training for Treasurer and Archon at Pi Kapp College. He is part of Drexel’s 5-year 3 co-op program where he has worked at PwC, Goldman Sachs, and SAP. Betesh enjoys reading, traveling, and debating sports in his free time.

Logan Ulrich, Eta Theta (San Francisco): Ulrich is a current junior at the University of San Francisco and the Archon of the Eta Theta Chapter, and will serve as the Student Representative to the National Council during his term on the Council of Archons. His future aspirations are to practice medicine in psychiatry and is currently a psychology major with a minor in Natural Science. Through his undergraduate career, he has served as Vice President to Greek Council, social chair for the Eta Theta Chapter, received his EMT license, and has had various internships within the health care field.

Patrick Lucitt, Delta Delta (Truman State): Patrick is a junior pursuing his bachelor’s in Business Administration with concentrations in marketing and management and a minor in Disability Studies. He joined Pi Kappa Phi in the Fall of 2016 and before serving as archon, and was the chapters secretary and house projects chair. Patrick works for the Center for Student Involvement as the Homecoming Coordinator and additionally serves as a member of the Student Activities Board. During the summer of 2017, he graduated from Pi Kapp College for Emerging Leaders and served as a Build America crew member. and in the summer of 2018 had the opportunity to serve as the Build America team project manager.

Nicholas Olivares, Beta Omicron (Northwestern State): Olivares is from Little Elm, Texas, and is currently a senior at Northwestern State University in Natchitoches, Louisiana studying psychology with a concentration in industrial organization. He plans to attend law school after completion of his undergrad concentrating in criminal law. Previous to his term as Archon, Olivares has served as risk manager and housing manager for his chapter. He is currently working towards opening Beta Omicron’s new house for the Fall 2020 semester. He graduated in the summer of 2019 from Pi Kapp College for Emerging Leaders. Olivares works in the Student Union Life office as the Student Union Manager. He is involved in his university’s Order of Omega, Mu Phi Chapter as their secretary, and is an event coordinator for the University Programming Council.

Ryan Saechin, Epsilon Nu (Sacramento State): Saechin was born and raised in Sacramento, California and is studying to get my bachelor’s in child development with a minor in counseling and marketing. He currently works in the education field, and his goal in life is to work in education while managing a small business on the side. As archon, Saechin wants to increase his chapter’s size and build even a stronger brotherhood that they already have.

Ryan Wadsworth, Zeta Epsilon (George Mason): Wadsworth is originally from Fort Myers, Florida where he lived for 10 years before moving to the DC metro area. He loves I love anything that has to do with water, such as swimming, snorkeling and scuba diving. Wadsworth joined Pi Kappa Phi in the spring of his freshman year because he wanted to be apart of something that had a greater purpose. Pi Kappa Phi gave him that through the Ability Experience, and leadership positions. Prior to serving as Archon for his chapter, he served as the IFC delegate for a semester.

Thomas Copland, Beta Beta (Florida Southern): Copland is a junior psychology major who hopes to go to graduate school for industrial and organizational psychology. Before becoming archon, he served as the philanthropy chairman for his chapter. He also works as an intramural sports supervisor at his campus.

William Pechous, Kappa Lambda (Wisconsin): Pechous is currently a senior attending the University of Wisconsin-Madison. He is studying Computer Science and has been a brother since Fall 2016. Pechous is a two-time pi alpha, completing Gear Up Florida in 2018 and Journey of Hope in 2019, and a founding father of the Kappa Lambda chapter. He was born and raised in Kenosha, WI and when not doing schoolwork he enjoys working out and enjoying all aspects of nerd culture.