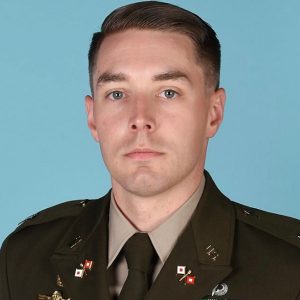 Randall “Randy” Ledoux, Alpha Xi (St. John’s), began a career in the United States Army upon graduation. Ledoux attended a field artillery basic officer leadership course and went on to complete Airborne School, and he served his country in Germany and Italy early in his military career. Later, Ledoux attended signal captain’s career course at Fort Gordon, Georgia, before moving on to New York to serve as battalion communications pfficer where he was deployed to Afghanistan. Upon returning from deployment, Ledoux assumed command of Charlie Company, 277th Aviation Support Battalion, 10th Combat Aviation Brigade, where he is currently serving. His dedicated service to his country has resulted in the reception of one Bronze Star, two Army Commendation Medals, and one Army Achievement Medal. Ledoux works with his company’s soldier and family readiness group to give back to the local community. He attributes his leadership style in the military to the lessons he gained as an undergraduate member of Pi Kappa Phi.