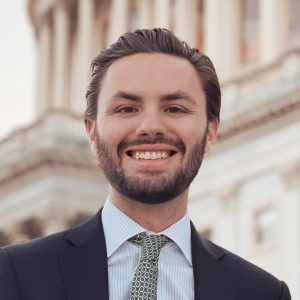 Max Pedrotti, Kappa Theta (San Diego), serves as legislative director for Congresswoman Carol Miller, who represents southern West Virginia in the U.S. House of Representatives. A founding father and executive council member of his chapter, Pedrotti has been grounded by the values of Pi Kappa Phi in his professional career. He is one of the youngest legislative directors on Capitol Hill, where he strives to improve the lives of citizens. Pedrotti is currently a fellow at the Center for Strategic and International Studies Congressional Foresight Initiative, a highly regarded international think tank, where he works with a bipartisan group to open lines of communication between key decision makers that previously were nonexistent. Through his advocacy work in Congress, Pedrotti is an avid supporter of nonprofits who provides organizations with further opportunities to support people.