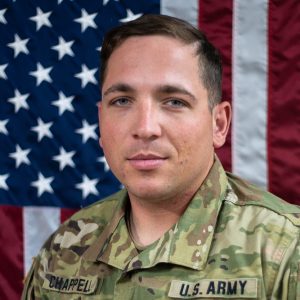 Jacob Chappell, Zeta Rho (Cal State – Fullerton), enlisted in the United States Army upon graduation. After attending basic training at Fort Jackson, he continued his military education at Fort Lee and in Nav School EOD. Upon completing his military training, Chappell was stationed at Tower Barracks Germany where he assisted in rendering safe countless explosive hazards. While in Germany, he was deployed to Kosovo where he trained United States Army partners and civilians, as a part of a task force that disposed of dangerous remnants of war. Currently, Chappell is stationed in Hawaii and has earned the rank of Staff Sergeant as well as the EOD Senior Badge. His commitment to responsible citizenship on a global level has ensured the safety of thousands.