Pi Kappa Phi is proud to introduce its team of Leadership Consultants for the 2020-2021 academic year. These eight men, selected for their extraordinary commitment to Pi Kappa Phi as undergraduate members and for their dedication to the future of the fraternity, will assist our brothers across the nation in a remote capacity this year, providing leadership support to chapter officers and guidance to help chapters achieve their goals. 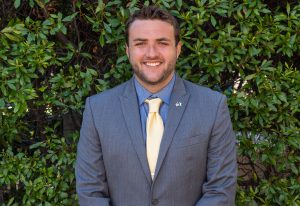 Zach graduated from Coastal Carolina University in Conway, South Carolina, in May of 2019 with a degree in marketing. During his undergrad career, he served both his chapter and IFC community. He served the Eta Pi Chapter as their Philanthropy Chair and also as Vice Archon. He served his IFC community as Vice President of Programming and the following year as the IFC President.

His hobbies include going to the beach, hanging out with friends, and being a diehard Cleveland sports fan. His favorite sports teams include the Cavs, Browns, Indians, Ohio State Buckeyes, and the Duke Blue Devils. He also enjoys spending quality time with his family and traveling the country. 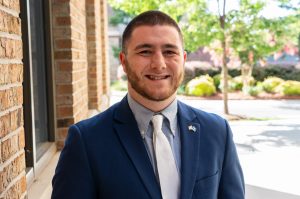 Dylan attended Coastal Carolina University in Conway, SC, where he received a degree in Intel and National Security and graduated in spring of 2019. During his time at Coastal Carolina, he was a member of the Dalton and Linda Floyd Family Mentoring Program and served as the Vice President of Philanthropy for the Interfraternity Council. While active at the Eta Pi Chapter, Dylan served two terms as Archon, one as Historian, and was the fundraising chairman his final semester.

In his off time, Dylan enjoys playing various sports.  His favorite sports are football, basketball, and baseball, but still enjoys watching all kinds of sports. He is an avid fan of all the Boston area sports teams and the Florida Gators. An interesting fact about Dylan is that he enjoys collecting sports memorabilia, ranging from old rookie cards to autographs. 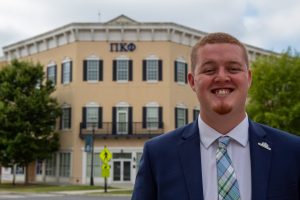 Chandler graduated from The University of North Carolina at Charlotte with a B.S.B.A. degree in management with a concentration in organizational management in May of 2020 Throughout his time in the Delta Lambda Chapter, he held the position of Greek Weekend Chair, Secretary and was a two-term Archon. Chandler had the privilege of serving on the 2018-2019 Council of Archons and was inducted into the Ad Astra Society in 2018. Outside of his involvement in his chapter, he was inducted into the Zeta Phi Chapter of Order of Omega in the spring of 2019 and was actively involved in the Student Government Association serving as a Freshman At Large Senator, Chief of Staff, Student Body Vice President and Student Body President.

In his free time, Chandler enjoys watching movies and TV shows, spending time out on the lake with family and friends, and wakeboarding. After working at a restaurant for 4 years in high school, he enjoys cooking and exploring new restaurants.

David Graduated from Morehead State University in the spring of 2020, where he received his bachelors in music education. While attending Morehead State he served as Archon, Treasurer, and Standards Board Chairman for the Delta Eta Chapter of Pi Kappa Phi.

In his free time, David enjoys playing trumpet with community ensembles and exploring the world from the seat of his bicycle. He also enjoys playing and watching soccer, a lifelong hobby and interest of his, go FC Barcelona! A fun fact about David is that he has been to Guatemala.

Patrick graduated from Truman State University in Kirksville, Missouri, in May of 2020 with a degree in Business Administration. During his undergraduate career, he served both his chapter and IFC community. He served the Delta Delta Chapter as their PR Chairman, Secretary and Archon, and he served his IFC community as IFC President and received IFC Greek Man of the Year in 2020.

He also had the privilege of serving on the Council of Archons for two terms and was inducted in the Ad Astra Society in 2018. Additionally, Patrick is also a graduate of Pi Kapp College for Emerging Leaders and two-time Pi Alpha, having participated in Build America in 2017 and 2018.

His hobbies include binge watching Netflix series, hanging out with friends, running, and cooking. Fun fact about Patrick is that he has lived in both Germany and England. 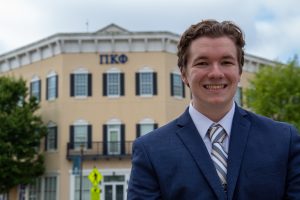 Gabe is an alumnus of the University of Oregon where he majored in journalism and minored in sociology. While active in his chapter, he served as Historian one year and as Scholarship Chair another year, in addition to being part of various committees. Outside of Pi Kappa Phi, he also volunteered with with the Residence Hall Association and Best Buddies.

Outside of his day-to-day routine, Gabe loves hiking, mountain biking, playing video games and going to concerts. He enjoys discovering new craft beers with his father and is on the undying pursuit to find the true best bagel in the country. 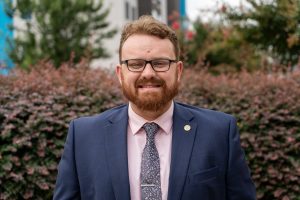 Owen attended Indiana State University in Terre Haute, Indiana where he graduated with a degree in Business Administrations in the spring 2020 class. During his 4 years at Indiana State, Owen served as the Recruitment Chairman, Homecoming/Spring Week Activities Chairman, and Vice Archon for the Eta Beta Chapter. Outside of Pi Kappa Phi, Owen also served as ISU’s Interfraternity Council Vice President of Member Recruitment and New Member Education, Welcome Team Leader, and during his senior year Owen was chosen to be the Sweetheart for the Delta Pi Chapter of Alpha Phi.

In his free time, Owen enjoys watching a variety of sports, with football, basketball, and hockey being his favorites. He also enjoys all things related to aviation and loves to listen and occasionally write music. A fun fact about Owen is the he has never broken a bone in his body!

Blake graduated from UNC – Wilmington in May of 2020 with a degree in Business Finance. He served the Gamma Theta Chapter as both Risk Management Chair and Archon. Blake was also a member of the Club Baseball team where he served as Vice President and Treasurer.

His hobbies include baseball, golf, hiking, and spending time with his family. He is a diehard University of North Carolina sports fan, while also cheering for the Panthers, Pirates and Hurricanes. An interesting fact about Blake is that he has collected over 200 baseballs from UNC baseball games.