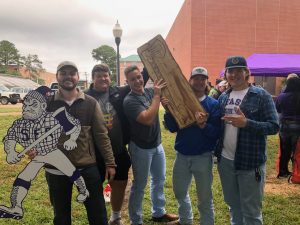 The men of the Iota Zeta Chapter at Stephen F. Austin displayed their strength and won the Greek Men’s Division in the Lumberjack Games on October 26th, 2019 for the univerity’s homecoming. The event was hosted by the Sylvans Forestry Club & Timbersports Team at Stephen F. Austin University, who presented the chapter members with a custom-made wood-burned trophy. 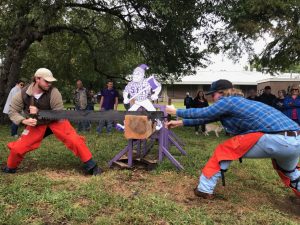 The men (Sean Christy, Robert Downy, Kelton Parson, Grant Payne, and Evan Wilson) competed in a tug-of-war, axe-throwing, a caber toss, and a single and double buck sawing competition. Each man participated in one of the events, and all five competed in the tug-of-war. The event also coincided with Stephen F. Austin’s homecoming.