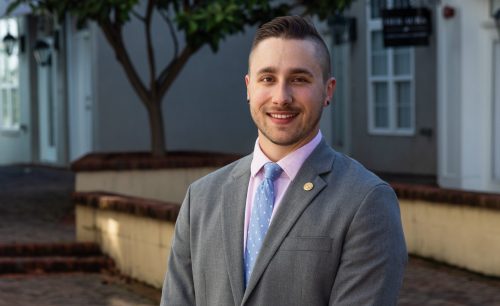 As a leadership consultant for Pi Kappa Phi, Roston is looking forward to working with the National Office and promoting the values of the fraternity as he works on a national team of fellow consultants. Roston is very excited to meet the brothers of various chapters and work with them on setting and achieving goals together, while helping them get the most out of their undergraduate career and membership in Pi Kappa Phi. In his role, Roston will work to provide support for current students and aid them in developing themselves as servant leaders through the multiple opportunities offered by Pi Kappa Phi and The Ability Experience.

Roston graduated from Case Western Reserve University in May of 2019 with a degree in Philosophy and a minor in English, where he was part of the Kappa Alpha Chapter of Pi Kappa Phi. During his time as an undergraduate member, Roston held the positions of Philanthropy Chairman, Vice Archon, and Archon for his chapter. As the first Pi Alpha from his chapter, Roston served as Historian on the 2018 Build America team where he worked to develop himself further as a servant leader. Roston has held employed positions in his university’s office of Undergraduate Admissions as a student coordinator and as an assistant in the Inamori International Center for Ethics and Excellence, where he groomed skills and values in his development as a leader. While being involved with his campus, Roston is a graduate of his local Hillel summer internship program, a Sinai Scholar, recipient of the Nemet scholarship in creative writing, and has been published in the International Journal of Ethical Leadership.

In his spare time, Roston enjoys working out, reading, listening to music, and doing anything with a group of friends. Being born and raised in Columbus, Ohio, Roston is a huge fan of Ohio State football (Go Bucks!). On nice days, he can be seen being ‘that guy’ sitting outside with his guitar.